How is SBAS implemented in Skydel? A customer is running tests with and without SBAS and reported seeing very little difference in accuracy with SBAS turned off versus on. I attempted to recreate their scenario (using a U-Blox ZED-F9P which supports SBAS on firmware 1.13+) and saw very similar results. I was playing around with atmospheric effects and added delays to the ionospheric model over the area I was conducting the simulation, but was unable to produce a situation where the inclusion of SBAS improved accuracy in any meaningful way. Are there additional errors or message modifications or settings that need to be included in the simulation for SBAS to have noticeable corrections?

Further, when my receiver was positioned in North America the receiver was seeing the SBAS system as EGNOS instead of WAAS as I would have expected. That could potentially be an issue with the U-Blox setup and not anything to do with Skydel, but figured I’d include it for completeness.

SBAS correction messages are sent correctly by Skydel, the problem often comes from the capacity of the GNSS receiver to apply them. We have succeeded to do ionospheric SBAS correction tests with a Novatel receiver.

There are a few important points to consider when testing SBAS ionopheric corrections:

But you can always reduce the interval time of some of the message type in the SBAS Message sequence if applicable (example: reduce the time interval of message 18 and 26 to 60 s). 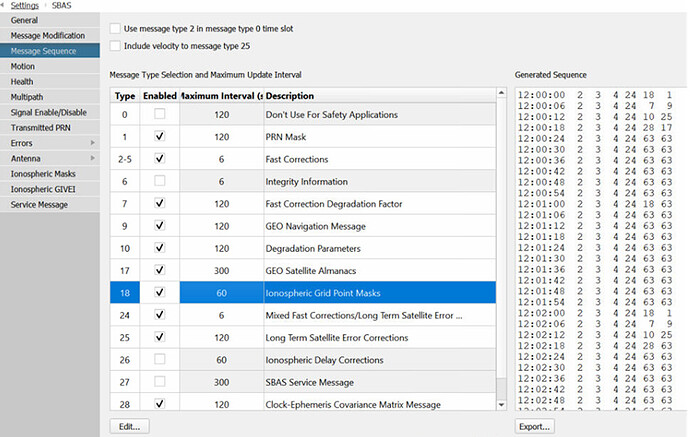